Equality Pays: Tackling the Pay Gap in Tech and Beyond

News organizations and women’s advocacy groups are looking ahead to the November election and predicting this could be “The Year of the Woman,” with a record number of women running for office at all levels of government. And they’re not just running – they’re winning – along with more people of color and more members of the LGBTQ community.1

Since the 2017 Women’s March rippled around the globe, there’s been an increased public willingness to engage in discussions about women’s issues. But, perhaps lost in this new activism are two unchanging facts: women might be winning seats in government, but they’re not gaining seats in the boardroom. And, no matter what rung they are on the corporate ladder, women still get paid less than men for the same work.2

The divisions are starkest in the tech industry, which has made headlines recently for being a “boys’ club” that shuns gender equality. Women occupied less than a quarter of computer-related jobs as of 2016. Those women who did have jobs were paid just 79% of men’s salaries.3 But many companies, including First Data®, have been taking active steps to address the problem.

Anthony Marino, First Data’s Head of Human Resources, and his team are working to identify issues and close the gender pay gap for good. “I grew up with four older sisters and have two daughters as does our CEO Frank Bisignano, so for us, pay equity is a very personal and passionate issue,” he says.

“We’re setting course to be one of the first Fortune 500 companies to achieve pay equity,” he says, “and not because it’s a legislative reason as much as it’s just the right thing to do.”

Marino outlines four of the most effective strategies and programs First Data has in place to help build and nurture a culture of equality throughout the company.

For a company with over 24,000 employees, identifying pay inequalities is an ongoing process. Marino’s three-step plan involves analyzing employees with similar job titles and comparing their compensation, identifying legitimate gaps, and once confirmed, strategizing plans to close them.

When his team identifies a gap, they look to see if it can be legitimately explained by performance, experience level, achievement, or time with the company. If not, the real work begins. “It’s not as easy as just looking at Person A and Person B. You must analyze all the variables. It takes a considerable amount of time to do this and to make sure we’re moving forward in a very thoughtful way.”

Recently, First Data shifted its hiring strategy. Rather than going outside the company to “buy” top talent, First Data now looks for existing employees with growth potential to “build” and promote from within. While this new “build” model appeals to all employees, it works especially well to help retain female employees, and it gives them a clear path to advance within the company.

As Marino explains, First Data is finally in a place where it can spend time on growth and development of its own talent. “When I got here, our transformation required many new skills, so 70% of the time we would go to the external market for talent. I’d like to see us flip that. I’d like to grow and promote our own 70% of the time and make outside hires more the exception than the rule.”

Almost five years ago, First Data established employee-led resource groups to create a sense of inclusion for all employees and to support diversity across the entire company. These groups encourage employees to connect with each other and with First Data clients who share common interests based on their gender, race, sexual orientation, disabilities, military service, and other factors. Groups gather to discuss workplace issues and share stories about their personal lives.

Today, 4,000 employees in 11 locations take part in ERGs. Providing a place where employees can find peers and safely voice their concerns and triumphs not only benefits members, but the whole organization.

With women comprising almost half of First Data’s employees, Marino says it was key for the company to have a strong maternity leave program. Last year, he and his team, along with Christine Larsen and Cindy Armine, launched an initiative that offers maternal, paternal, and adoption leave benefits, so all parents, regardless of gender, have time to enjoy their growing families and to develop a better life-work balance. “We did our research and decided if we were going to do it, we’re going to do it right. Now, we have one of the best programs out there.” Marino points out that implementing initiatives has enabled First Data to increase employee satisfaction and cut attrition by half. The company has also been recognized for its efforts. First Data was included in Bloomberg’s 2018 Gender Equality Index, and designated as one of DiversityInc’s “25 Noteworthy Companies.” The company also earned a place on the Dave Thomas Foundation’s List of “Top 100 Best Adoption-Friendly Workplaces.”

Mia Shernoff, Global Head of Marketing for First Data, has witnessed the company’s efforts first-hand. “The sign of a great company is when you don’t notice gender differences in roles and titles,” she says, “We have a culture that champions diversity and equal pay, and it feels like we are good at that.”

As the demand for top female talent increases, Marino says he feels companies with programs to make women feel comfortable and valued will rise to the top. “Companies that don’t do this won’t be able to compete,” he says. “For us as a company, we’ve got to have great programs for women, and an environment where they feel safe, energized, and capable of succeeding.”

“Women are already 50% of our workforce. We want them to look at First Data and not only be able to say, ‘First Data is a company where I love to work,’ and hope that someday their son or daughter will want to follow in their footsteps,” Marino says. “To me, that would be the best proof we’re doing a great job, having them recommend our workplace to the next generation who will follow in their footsteps.”

Shernoff says she gives the same advice to all new employees she meets, particularly women. “Have confidence. New ideas are needed and encouraged in high-tech companies, and diversity is a catalyst for innovation. Be aware of our business and knowledgeable about the role you play. Then, speak up, share your ideas, and contribute.”

On the Escalator
Sandy Mollett

Since she joined First Data® three decades ago, Sandy Mollett has seen the corporate culture change first-hand, and she’s helped the company grow. Given the opportunity to compete on a more level playing field, Mollett rose through the corporate structure to become one of the highest-ranking owner-associates at First Data. She’s now Senior Vice President, Head of Operations and Controls for Network and Security Solutions (NSS). What makes Mollett’s story even more remarkable is that for most of her tenure at First Data, she kept her true sexual orientation secret from her fellow employees. “Coming out professionally was extremely difficult for me,” Mollett says. “Like so many, I felt coming out would limit my ability to grow and succeed in my career.”

But, just about four years ago, there was a change in First Data leadership that brought a new focus on diversity and inclusion, with CEO Frank Bisignano declaring himself the Chief Diversity Officer. Mollett says, “that was just what I needed – my safe path!” She came out and introduced her colleagues to her wife of 26 years. That change, and her newfound openness, helped her become an even stronger leader at work and in the Atlanta community. She founded and co-chaired First Data’s Atlanta Diversity and Cultural Council (ERG Steering Committee), is an active member of the Women’s Leadership Council and serves as the Atlanta Executive Sponsor of UNITY – First Data’s LGBT ERG. And through that connection, Mollett was asked to become the Corporate Relations Board Chair for the Atlanta Gay and Lesbian Chamber of Commerce and took the helm as President of the Chamber in May.

“Companies and CEO’s have the power to influence how we do business in our communities – leading by example,” says Mollett. “When we band together, companies big and small have the ability to influence corporate diversity in powerful and positive ways.”

On the Escalator
Dania Ruiz-Paramo

When Dania Ruiz-Paramo applied for a job at First Data® straight out of high school, the company gladly enlisted her as a representative in the customer service department, where her ability to speak both English and Spanish was highly coveted. Over the next 20 years, Ruiz- Paramo picked up more highly coveted skills and expertise that propelled her to the position she holds today, Senior Account Executive. Initially, she was tapped to be a customer service representative, but quickly started to work with the Blank Financial Paper group, where she ordered blank official checks and money orders. She’s since been given the opportunity to tackle national sales for the entire suite of First Data solutions. She says she understood from the beginning that it was her responsibility to take charge of her career, and that’s what led to her success.

“Every boss I have had at First Data prepared me for where I am today,” says Ruiz-Paramo. “Any job or role I wanted was there for the taking, so long as I worked hard for it.” Ruiz-Paramo says there was great value in growing up with the company— the only place she’s ever worked—and that First Data rewarded her with loyalty and opportunities. “Loyalty isn’t something you usually see these days. Most companies value external experience. But a few years ago, there was a big shift at First Data culturally, and now we’re making the changes we need to make.”

She says there’s one thing she’s glad hasn’t changed: “First Data always gives you the chance to earn what you want to earn, if you want it bad enough.” Ruiz-Paramo says, “It’s the perfect place to thrive if you really want to. But you’ve got to want it.” 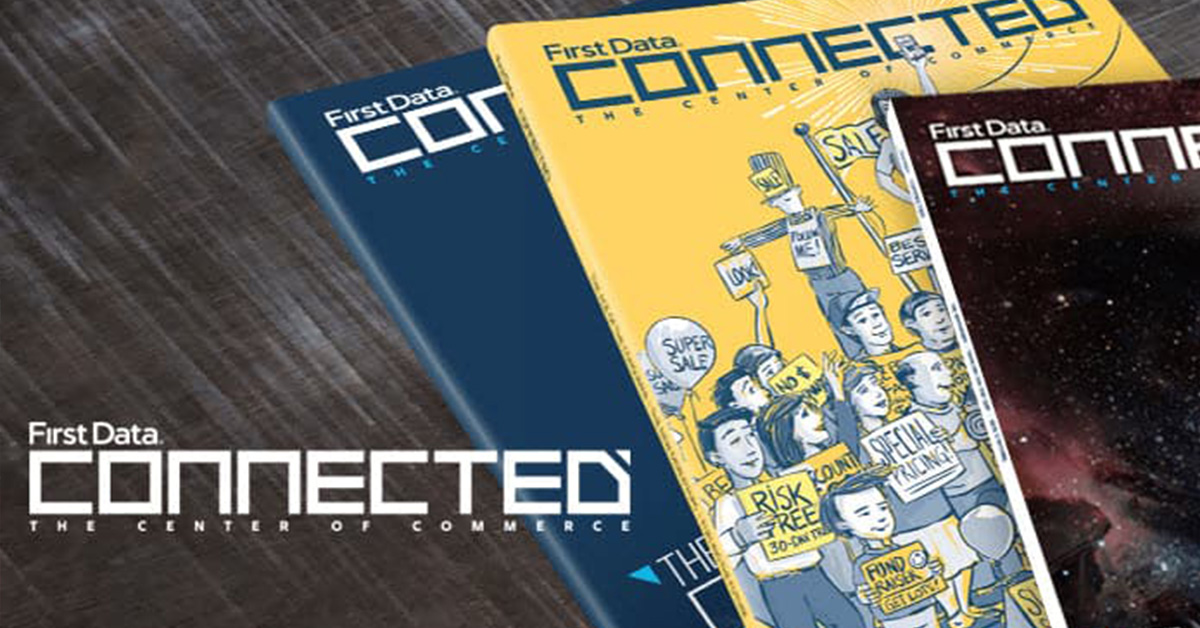 Marketplaces and consumer desires are changing across the globe. To keep up with the pace, new partnerships are being formed and battle lines are being drawn. This issue of Connected explores how trailblazers are turning payments into a competitive advantage by accepting all payment types anywhere, expanding and managing risk, and understanding the data to create conversational commerce.

Digitize Payouts for the On-Demand Economy